New Review! klick the Buttons below!! 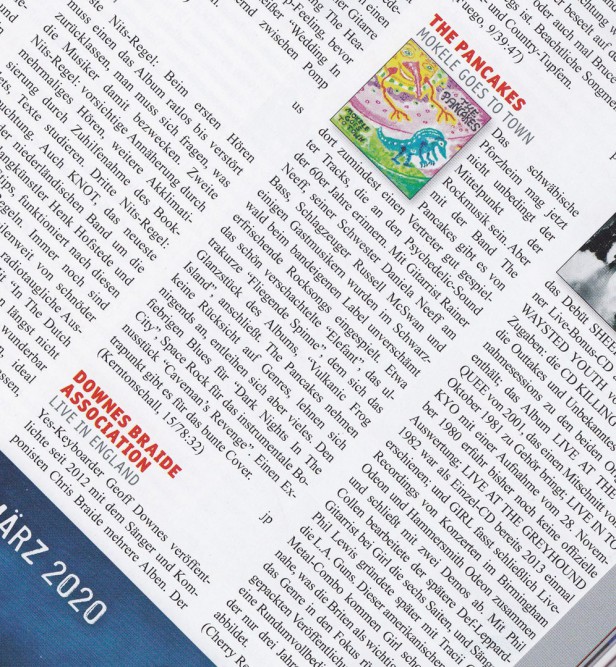 Some Cool reviews about the new Album of the Pancakes: Mokele Goes to Town. Click the Buttoms for the Links 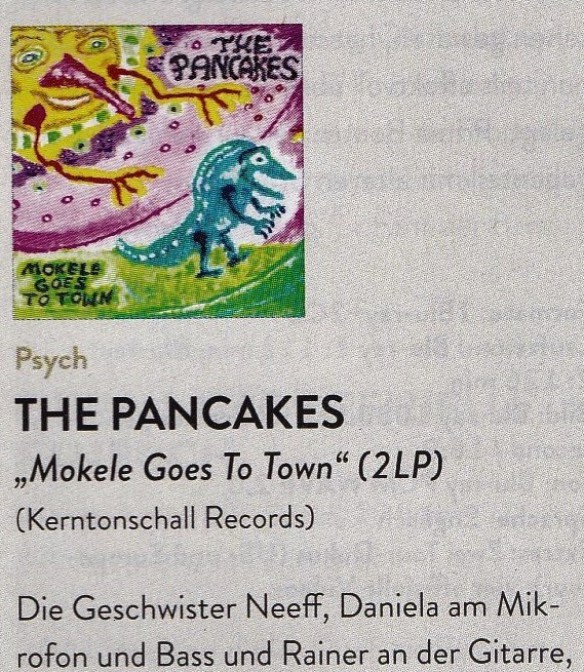 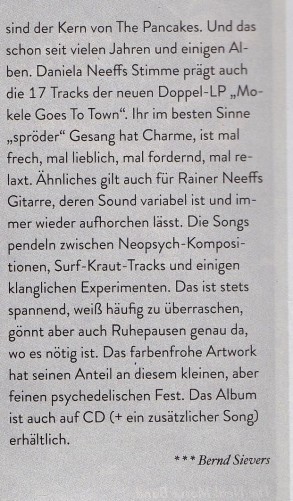 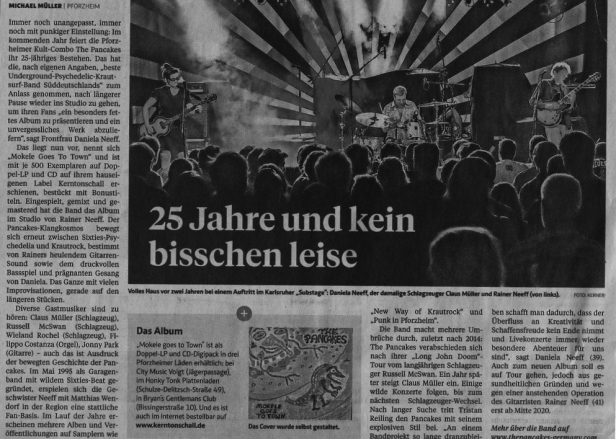 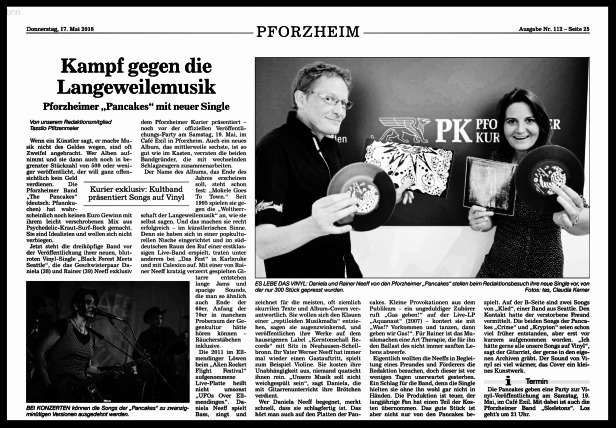 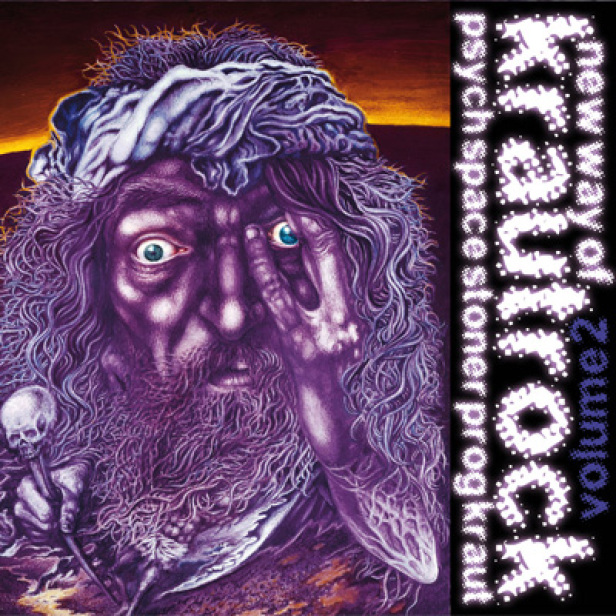 
A little while ago I reviewed Volume 1 of Tonzonen's ace 'New Way of Krautrock', and I'm pleased to report that Volume 2 is imminent. This is the second volume in a planned series of five that Tonzonen, in collaboration with Underground Äxpärten, are putting out, alongside the Bandcamp portal to all things new and kosmische. Eight tracks in all, Volume 2 brings us al that's good in the psych/krautrock scene in Germany at the moment, and there are some real goodies.

The legendary Ax Genrich (of Agitation Free and Guru Guru fame....can't get a much better krautrock heritage than that!) gets things going with a typically robust exercise in improvised guitar slinging. 'Livin' In Germany' sees Genrich illustrating exactly why he's considered a virtuoso of psych axe work (pun intended!); plenty of power and fuzz and agile fretwork...a stonkingly good track with which to open an album. Next up is 'Dreadnought' from Space Invaders, from the album of the same name (which I reviewed here). Six minutes of soaring guitar, pummeling drums and spacey synths that doesn't let up from the start...it's brain melting stuff! 'Smale Stone' by Ad'Absurdum is a long cosmic trip, full of spacey effects and organ with a retro tinge. Of all the tracks on the album it's the one that sounds reminiscent of the seventies. Over its eleven minutes it evolves into a searing cosmic jam...a track in which to get truly lost. Vibravoid are up next with an awesome version of Iron Butterfly's 'In A Gadda Da Vida'. As cover versions go, this one stays faithful to the original..a bit more fuzzed up maybe, but why mess with perfection!..it has the same dense guitars and instantly recognisable organ lines. The band have approached the song with a sense of reverence and respect and have done justice to a truly iconic song. Space Debris give us 'Villamountain', the longest track on the album at just over fifteen minutes. It starts with a simple guitar that becomes a bluesy riff over some nifty organ lines. With one foot firmly in the heavy psych of the seventies and another in acid rock, it is a track that rattles along and doesn't waste one second of those fifteen minutes.....genuine krautrock for the 21st century. 'Shouting In The Desert' by Wide Scope follows, a band of whom I knew very little about. Luscious washes of synth with some spanish guitar herald the start of a real fuzzed up monster of a track...the muscular guitar heavy enough to shake the speakers and the flamenco-like guitar picking out the melody over the top. Snatches of a middle eastern melody inveigle their way in but it is the wall of fuzzy sound that is the star of this track. I will definitely be doing some investigation into this band. To anyone who has been a fan of German psych/ krautrock over the past decade or so will need no introduction to the next band or song; The Pancakes have been honing their own individual sound for a while, a sound that melds psychedelia with kosmische, with some surf/ garage punk thrown in for good measure. 'Man On The moon', taken from their 'Space Cow' album is a number that almost borders on the sultry, the plaintive vocals from Daniela Neeff are backed with some glorious wah wah guitar, courtesy of brother Ranier, that sporadically breaks into some top notch acid jamming. No other bands sound like The Pancakes, although I would imagine that plenty would like to....absolute legends. The album is brought to a close by Vintage Cucumber's 'Nachtfrau', a short number that is rich in drones and echoey vocals and guitars that sound like 'Dear Prudence' (the Siouxsie and the Banshees version). An atmospheric and hypnotic way to bring an end to proceedings.

As with Volume 1, this volume is packed to the gunwales with some top of the range psych/krautrock. When the planned 5 release series is complete it will be an essential document of contemporary kosmische sounds, and as stand alone volumes, both 1 and 2 are fantastic compilations filled with variety and creativity. Much kudos to Tonzonen for bringing a stellar line up to the records. 'New Way of Krautrock Volume 2' is available on CD from the Tonzonen webshop here, and, as before, check ouy the New Way Of Krautrock Bandcamp page. 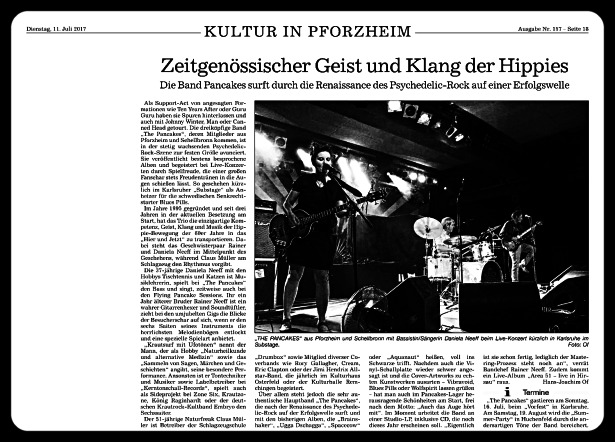